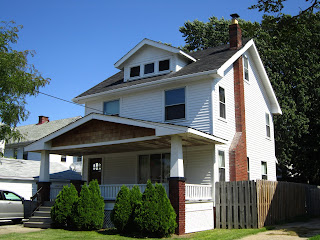 I decided to break up my "Exterior Paint Stripping" post into four sections, one for each side of the house since it is such a huge project, lasting several years, and I had hundreds of photos.

In the summer of 2010, I picked up where I had left off the previous season. I demolished the front vestibule which had been an add-on at some point. I then had to have a custom milled porch railing made for the side of the porch, since the original had been cut in half to accommodate the vestibule. I then began stripping the paint from the clapboard, using the Paintshaver Pro.

In 2011 I stripped the 2nd story clapboard and the dormer. I also replaced the 2nd story fascia board that the gutter was attached to, as it had some rotted areas. Once the paint was stripped completely using the Paintshaver on the main areas and a heat gun on the trim and hard to reach areas, I sanded everything with 80 grit sandpaper using a palm sander. Also, any broken or split clapboard was replaced or repaired. Holes or gouges were filled. After sanding, I washed everything down with a garden hose and scrubbed it all with TSP and a deck brush. I then rinsed thoroughly and waited a few days for it to dry completely using a moisture meter. The moisture content should be below 15% before applying the primer. I then primed using Sherwin Williams oil based primer.

In the 2012 season, I went back and removed the broken drip cap from the dormer windows, and all the broken off window sill edges. These items, along with any trim, are broken off, cut, or removed by aluminum siding installers. I had these pieces custom milled in Cypress to the correct profile, primed, and installed them. I then caulked all the vertical seems between clapboard and trim.

In the end, all the trim will be replaced and the house will be painted with a historic color scheme.