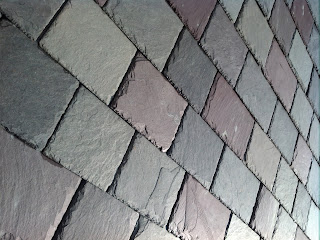 This year marks the centennial anniversary of my house. What better gift to give it than a new slate roof?

The slate had been sitting in my backyard for a year before I finally got the roof. My intention was to get the roof done as soon as the weather broke in 2013. But then I figured, "why do a roof in good, warm, dry weather when I can put it off until November through January of one of the worst winters in history?" No, I actually did try to do it in Spring or Summer but all the forces of the universe conspired against me so the project didn't begin until late September.

The condition of the roof was pretty horrible. The original slate had been covered with asphalt. Yes, that actually happened. And there are quite a few houses here that have had their slate covered in asphalt. I'm not sure what actually goes through someone's mind when they decide this is a good idea... "Hey, let me cover up this beautiful slate, which would last forever, with something ugly which will need replaced every 20 years." I feel like there should be some kind of public service announcement on why this is a terrible idea. Anyway, I'm not sure when the asphalt was put on but it was disintegrating, falling off the house, and leaking.

The process began by trying to find a roofer, since the one I had originally planned on using disappeared a year ago and hasn't been seen since. I found this to be a trend with roofers. Most don't show up on time, some don't show up at all. I was really scared that I'd end up with half a roof and no roofer. So I think I met with every slate roofer in Ohio (well, the ones who showed up). Seriously, I probably met with a dozen of them. Some I liked but couldn't afford. Some were clearly full of crap and knew less about slate than I did. At times, I seriously contemplated doing it myself (even printed out two large slate manuals and watched a lot of YouTube videos). This process dragged out for months. In the end, I finally made a decision that I am quite happy with.

This was the first time I've ever hired anyone to do anything to my house. It was really hard, at first, to put my trust in someone else when I have invested so much of myself into this house for so long. I probably would have driven the roofers crazy by standing there, watching the entire time. Their only saving grace was that it was so cold that I couldn't be out there for more than a few minutes at a time. I did, however, set up a time lapse camera which took a picture every minute of the entire project. Thankfully, they were good sports about it. Actually, they are really awesome guys and I like them a lot.

It was a really long project, and the weather certainly didn't cooperate. I'm fairly certain that the horrible weather we've had this winter is entirely my fault, for having a roof installed. Blame the apocalypse on me.

I had already done the tear off and structural repair of the porch roof, and replaced all the decking. Then the roofers came and did the tear off of the main roof. They tore off the existing asphalt and original slate, replaced any rotted boards, and covered everything in Ice and Water Shield. Amazingly, there was very little wood replacement done on the main roof. Only a few boards. It was in really good shape.

The next phase was to somehow lift the sagging eaves. The overhangs on this house are held up entirely by the bead board that can be seen from the underside. And this supports the giant, thick fascia boards. For some reason, these bead boards only went in to the first rafter. So there was nothing preventing them from sinking down from the weight of the roof and fascia boards. The eaves had drooped down at least a couple inches because of this. It was quite noticeable and had to be corrected in order to put the slate on. The question became, how are we going to lift them back up and keep them up? Then I remembered, I own scaffolding! One of the best investments I've ever made. So I set up the scaffolding under the peak of each eave, we put a bottle jack on the scaffolding and used a 2x6 to lift up the peak until it was level. Then the roofers replaced about 5 courses of bead board on each side of the peak, bringing it a few rafters in and screwing it down with long deck screws. We then lifted the bottom two ends of the eave in the same fashion, and replaced another 5 courses on each end. We released the bottle jacks and crossed our fingers. It worked!

I opted to have the entire roof covered in Grace Ice and Water Shield (the best stuff on the market).  This is like a black, rubbery sheet that they peel and stick on top of the roof decking. It's pretty expensive. I think I paid about $130 per roll and required 8 rolls for the whole roof. I figured there was no reason to skimp, since I was going all out on a slate roof anyway. This made it possible to waterproof the whole roof while the slate was being installed. And it acts as an additional layer of roofing, if there are ever any leaks.

Once that was all done, it was finally time to put slate on the house. The rear of the house was done first. There were no obstacles except one chimney and the stack pipe, everything was flashed in copper. At this point, the weather really took a turn for the worse. Below freezing temperatures, ridiculous wind chills, snow, ice, bleh. The roofers would have to sweep the snow off the roof before starting in the morning. It was crazy.

The front half of the main roof was more challenging, with the dormer, valleys, and another chimney. That's when the "Polar Vortex" came to visit. I've been back in Ohio for 9 years and had never seen such ridiculous weather until this. I don't know what's going on but I'm starting to wonder if it will ever end.

The slate was topped off with copper ridge vents along all the ridges, including the porch. It looks really good. Then I have square copper soffit vents that will go between each rafter, across the front and the back, 28 of them. So the attic will be very well ventilated.

The color of the slate is really awesome. So vibrant. There are greens, grays, blacks, and purples. And the width of the slate is random as well. It came out really, really nice. I can't wait until summer, when I can enjoy looking at it for longer periods of time.

There is a small roof over where the dining room built-in cabinets protrude from the house. I decided to have this done in standing-seam copper, which looks amazing.

When you are married to a house, as I am, getting a new slate roof is like the honeymoon. No project will ever top this one. It occurred to me, at some point during the project, that the roof was the best looking part of my house. Then I realized that after over five years of of putting my blood, sweat, and tears into this house, the best part is something I didn't even do. That was actually a depressing moment.

I still have to get something done with the balcony roof. I want to do it in flat-seam copper but I don't think I can afford anymore copper. It was probably tin originally. I'd be happy with that. Why don't people do that anymore? I can't put up the balcony railing until that roof is done.

And somehow I ended up with a TON of slate leftover. I'm not sure who miscalculated, me when I ordered it, or the slate company when they sent it. I supposedly ordered 15% extra, knowing that some would break. A lot of them broke and I still have at least 3 full pallets of slate left! So I think I have enough to do the carriage house when I build it. I just have to deal with it taking up space in my driveway until then.

Here's a rough breakdown of this entire project:


I want to thank Above & Beyond Roofing and The Cleveland Restoration Society for facilitating the loan through the Home Heritage Program.