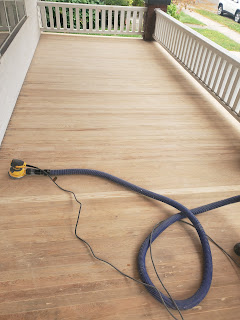 When I bought the house, I noticed that one of the porch floor joists was covered in fuzz. So someone had sistered another 2x6 to it. That area of the porch was sagging and got worse over the years. In the past year, it had gotten pretty bad. It was bouncy and I felt like it wasn't too far off from someone falling through the floor.

The porch steps were also in really bad condition.  The treads were coming up, the entire assembly rocked back and forth. They were never built level. I think they were probably store bought steps and not really right for the height of the porch. They had a junky metal store-bought railing attached which didn't fit right and wasn't at a matching angle to the steps.

A preservationist friend told me the fuzz covering the joists was actually a wood fungus and that it needed to be killed. This past summer, I planned to tackle this project. I was hoping I could get by with maybe just replacing the fuzzy joist and jacking the floor up. But as I started to dig into it, I realized that all of the beams around the perimeter of the porch had rot to some extent. The floor joists themselves, aside from the 2 or 3 fuzzy ones, were fine. But all of the beams needed to be replaced.

I removed the porch lattice and removed and chopped up the terrible porch steps.I decided I'd rebuild steps from scratch, custom.

As I intended to keep and restore the original floorboards, I decided it'd be easiest to strip the paint off of them before removing them. I used the Paintshaver Pro for this. To my surprise, someone had already done it before. There was only 1 coat of latex or enamel paint on the floor.

I numbered each tongue and groove board and then painstakingly removed each one, carefully trying not to break them. The only way to achieve this was to cut each nail w/ a sawzall as I removed each board.

The beams, or ledger boards, were made of two 2x6's nailed together. The porch columns were actually built around these beams originally. So where the front beam meets the side beams, inside the column, they were nailed together. This made it a fun challenge to try to remove these. Even the longest sawzall blade was not long enough to reach those nails. I was eventually able to get all the old wood structure removed.

I replaced the structure with treated lumber and ran everything the same way it had been done originally, with the seams of the 2x6's at the same spots. Due to settling, the slots in the columns that the beams sat on were not level anymore. I had to do a lot of adjusting and shimming to get the structure level left to right.

The bottom of the boards on the bad end of the porch had some of the fungus that the joists had, but not as bad. To prevent this from getting worse, I laid them all out on the driveway, bottom-side up and washed them with a wood fungus killer - Tim-bor. I let them dry in the sun. Then I sanded the bottoms of all of them w/ 80 grit, removing the loose wood fibers from the dead wood fungus. I then quickly rolled them with Zinsser mold killing primer to prevent that from ever happening again.

I then sanded the top of each board with 80 grit and removed any residual paint and nails. I did this in batches of 30 at a time, installing each batch afterward. When all the boards were reinstalled, I covered the entire floor with Woodwise Full Trowel Filler. This is a floor filler made to be put over an entire hardwood floor with a trowel, filling every groove and hole. This is done before the final sanding of the floor. Due to the settling and sagging, some of these boards were warped and bent over time to adjust to the shape of the floor. Now that the floor was level and straight, they did not all go together perfectly tight. This filler filled in any seams, gaps, and holes.

After applying the floor filler, I sanded the entire floor with a belt sander and 80 grit. I did this on my hands and knees because I'm a glutton for punishment. I was originally going to rent a floor sander but it seemed like it wasn't that large of an area and that it could easily be tackled with the belt sander until I started doing it... That was painful. Don't do that.

Belt sanders are aggressive. So this meant that I had to sand it all again, again on my hands and knees, with the random orbital sander. It came out beautifully smooth, flat, and straight... and not bouncy anymore.

I only had time to coat it with 1 coat of Sherwin Williams Porch Enamel. By this time it was getting cold and it has to be above 50 degrees to apply the porch enamel. So I didn't have an opportunity for a 2nd coat.

Now for the steps. What a good time this was! I wanted them built right, each step an equal height. So buying store bought steps or stringers was out of the question. The best part is, whoever poured the concrete sidewalk leading to the porch poured it at an angle toward the driveway... Why? I just want to know why?? Why not just make it level and grade the lawn?? Why? You know how much fun it is to make a perfect stringer? Now, try to make 5 perfect stringers where they are all different heights but come out level in the end. If I had to do it over again, I'd just remove and repour the sidewalk first.

But they did come out level in the end. I used treated wood and treated 2x12 stair treads with grooves in them for added traction. I ran out of time before I could build the railings so that's on hold until Spring. But I intend to build railings on each side, to match the style of the porch railings, with newels at the bottom. And of course, I also didn't have time to paint them by this point. But it's better for the treated wood to dry out anyway before it's painted.