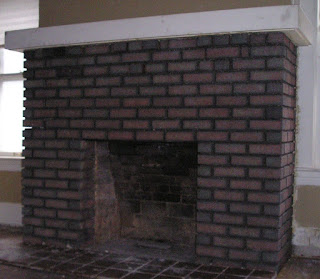 The original brick fireplace had been painted over at least 3 times in its life. One of my first projects was to restore it. I began by removing the ugly brass screen. I read that you shouldn't use a sandblaster on masonry and that the best way was to just use old fashioned elbow grease and paint stripper. After about 10 hours of scraping and scrubbing, I was getting nowhere. I kept thinking "there has to be a better way". I searched the internet and came across someone's advice of "soda blasting". Instead of shooting sand, this machine shoots baking soda, a non-abrasive alternative to sandblasting which doesn't cause damage to bricks or mortar. I did some research and found that it was used to clean the statue of liberty and that it is used a lot for paint removal from bricks of historic buildings, and to clean fire damage. After watching some videos of soda blasting in action, I was sold. I purchased a soda blaster (which is just a sandblaster with a different feeder valve). After getting fully geared up, with earplugs, respirator, paint suit, gloves, and hood, I was ready to go. In about 2 hrs of soda blasting, I almost completely cleaned off about 17 bricks and the mortar between. One 50lb bag of baking soda lasted a bit over 2 hrs and cost around $20.

I had to remove EVERYTHING from the living room and seal it off. Open the windows for ventilation, and put an exhaust fan in the window. The room became a giant cloud of dust in no time. After a while, it looked like I was standing on a white sandy beach, as baking soda covered the entire floor.

After many hours with my air compressor, which could barely keep up, I gave in and rented an industrial compressor. Then I started flying through the bags of soda. I could get through a 50lb bag in less than a half hour.

I had tested some Peel Away 1 on one brick to see if that would work better than soda blasting. It seemed like it would take way too long, so I opted to continue with soda blasting. When I blasted the test brick, I noticed it came cleaner MUCH quicker. So I decided, at that point, to do the whole fireplace with Peel Away.

I covered the entire fireplace with Peel Away 1 and waited for about 12 hrs. I peeled off the paper, scraped as much excess Peel Away off the brick as I could, then scrubbed it all down w/ water...BIG sloppy mess. That still left a lot of Peel Away residue on the bricks, and some spots of paint left here and there. I then used the big compressor to clean all the faces of the brick.

If I were to do it over, this is what I would do. Get a bucket (or 2) of Peel Away 1. Put it on (USE GLOVES!) really thick (1/4" or so) and get into the mortar good. Cover it up with the Peel Away paper (you'll have to buy extra packs) -Sherwin Williams. I'd probably wait a week. Remove the paper and scrape as much of the Peel Away as you can. Here's the tricky part. If you already have nice floors, I wouldn't recommend this. I tried everything, plastic, towels, masking tape, and towels to keep the water from the hardwood floors. It didn't work. Luckily, I still need to refinish my floors, so it's not that big of a deal. But supposedly Peel Away 1 will darken hardwoods, so that concerned me. I don't want the area around the fireplace to be darker than the rest of the floor. So now you get bucket after bucket of clean water, and a scrub brush (try to find one w/ long stiff bristles), and scrub the Peel Away off the brick and mortar. Let it dry. Then soda blast. SunBelt Rentals carries the compressor and some even have a nice soda blaster to rent (which I would have done, had I known ahead of time).

This project took me a year on and off and cost me around $1200. It was the biggest mess on earth, my entire house had baking soda in it, even though I had tried to block off the living room as much as possible. It got into the ventilation system and redistributed all over the entire house. But in the end, it was worth it, the fireplace is beautiful now.