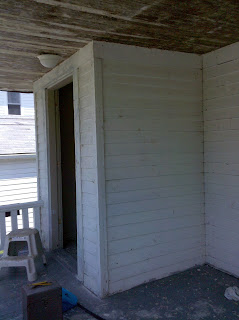 At some point in this house's life, someone added a little vestibule onto the front of the house so that there were two front doors. It protruded out onto the porch a few feet. When I moved here, the main door was on the very front, and the inner door was a thick wooden door with about 15 panes of glass. However, I always had a feeling that the outer door used to be on the inside. The interior of this vestibule had the same porch ceiling that the rest of the porch had. The exterior of it was finished with cedar clapboard siding like the rest of the house. I didn't like this vestibule. It was a pain to try to get through when carrying stuff. I didn't see any benefit to having it and I knew it wasn't original. But It was added very early on (it is there in the 1955 photo).
I decided to move the door back and remove the vestibule. The door fit like a glove in the inner doorway (where I'm certain it was originally). It didn't fit too well on the outer doorway. I then removed the vestibule. The original floor and ceiling are all intact so it was just a matter of removing the clapboards, plywood interior walls, and framing. There was an extra layer of wood flooring put on top the existing porch floor inside the vestibule. This is the hardest part to remove. The best part about this is that where the vestibule walls were, the original front wall of the house had the original color paint. So I finally know what the original color was. It was an olive green kind of shade. Which is funny because that's the color scheme I was leaning toward when I repaint. And I also get to see a section of the original porch ceiling that was never painted.

The worst part of this project is that the original side porch railing was cut down to a shorter length when this vestibule was added. Of course, they didn't save that for me, so I need to have a mill match the porch rail so I can make it connect to the house again.