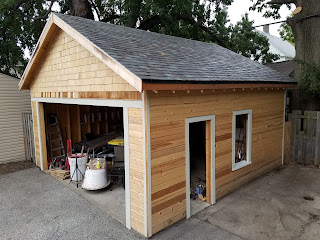 In summer of 2017, I finally got to demo my "cardboard garage" that was built in the 1980s. The roof was rotted, caving in, and the whole thing was falling apart.

Back in 2012, I had disassembled a historic garage garage that was about to be demolished. I took all the dutch lap siding, carriage doors, lumber, and window from it. My plan was to use the siding, carriage doors, window and side door on my garage, upgrading from the cardboard siding. When I started taking measurements, I realized the entire walls of my garage, not just the door opening, were way too short for the carriage doors. I really wanted these carriage doors. So long story short, I built an entire new garage to fit the carriage doors. I also had enough slate leftover to re-roof the garage, which needed it, but the structure could not support slate. Studs were on 24" centers. It was literally the cheapest garage you could possibly build. It didn't even have a side door, let alone any windows. So I built a new one on the existing pad that was poured in the 80s.

It only took about an hour to demo the cardboard garage. Then another week of hauling it to the dump and digging / regrading the ground around the foundation. There are tons of roots from my neighbors' two giant trees.

Originally, I intended to use the dutch lap siding that I salvaged from the historic garage but due to the profiled top of each board, it would have taken roughly the rest of my life to strip all the paint off to restore the siding. I ended up selling it and buying brand new dutch lap wood siding from Cleveland Lumber. I reused some salvaged lumber from the cardboard garage and the historic garage but most of the framing was new.

My dad, uncle, and great-uncle helped me frame the new garage, which took a little over a week. My grandfather helped for some of the siding installation. Everything else I did alone. Everything is on 16" centers, including roof rafters (2x8). I did exposed rafters and 1 foot overhang on all 4 sides. Beadboard eaves, just like my house. Cedar shake front gable to match the front porch gable of the house. Corner trim matches the house. I made it to the tallest code allowance so that I could put a loft for lumber storage. It has a 6/12 pitch roof. I didn't use any OSB. I used plywood wall sheathing and 1x solid wood boards for the roof sheathing. The entire roof was covered in Grace Ice & Water Shield except for the ridge vent. And I installed the slate myself. My roofer who did the slate roof on my house was kind enough to answer any of my questions as things came up.

It is basically a replica of a historically built garage, except they didn't use any wall sheathing back then. They just put the dutch lap right over the studs. I had gone to a garage repair seminar before starting the project. The guy giving the seminar owned a construction company that specialized in repairing and building garages. In his slideshow presentation, he showed a garage he had built which was nearly identical to my design except it didn't have a slate roof. I asked what that one cost. I know the cheapest 2 car garage you can get is around $20k. He said that one was around $80k but included the new driveway. Swap the driveway for a slate roof and we're probably in the same ballpark. But I spent less than $5k in lumber and did the labor myself.

I have the 4 historic carriage doors that I salvaged from the historic garage in 2012 and that was another project in itself that I'll have to write a separate entry on. I had to disassemble each one completely and rebuild them.